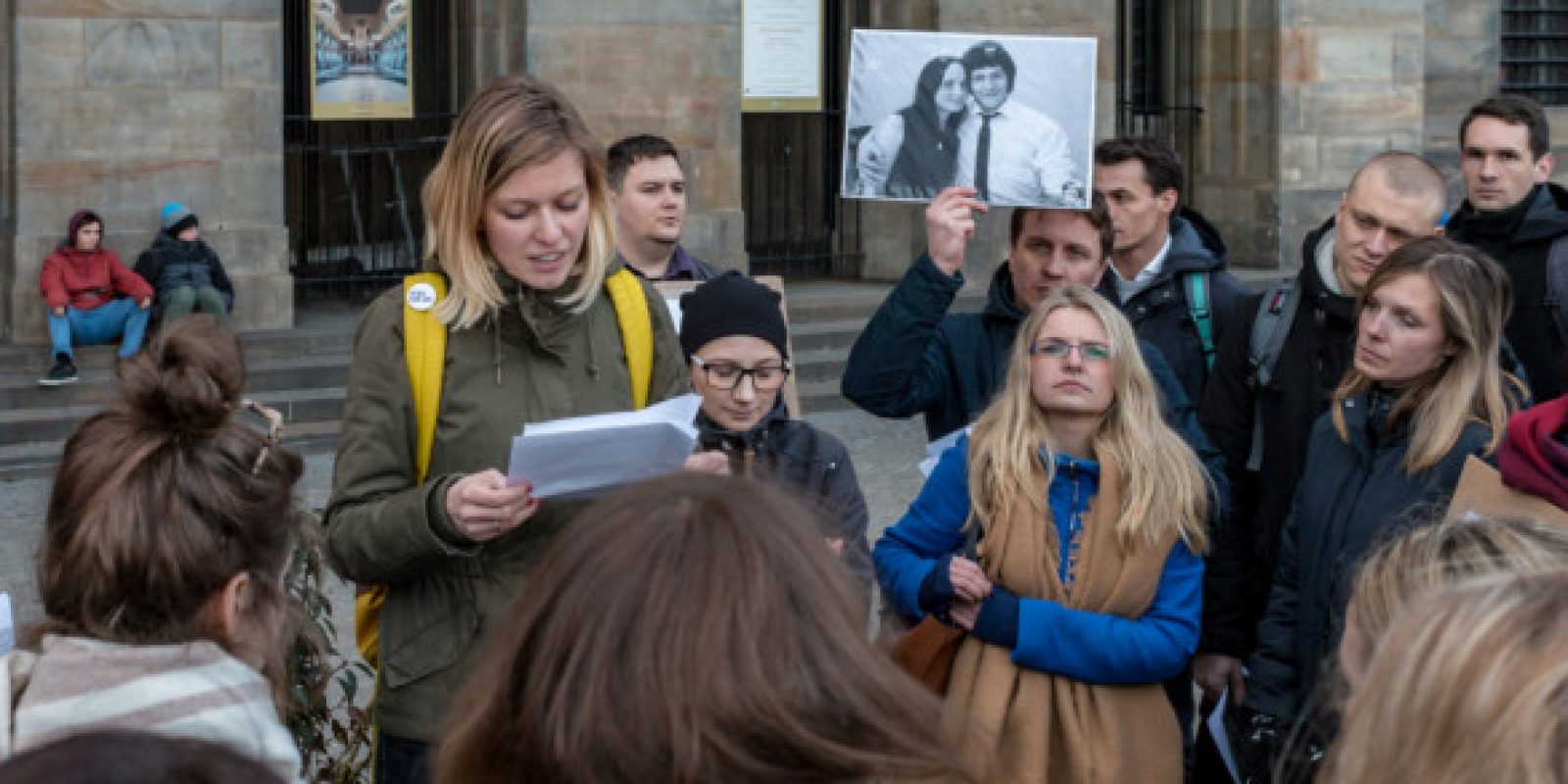 Actiefiguren | “Every generation is responsible for peace”

Our first Actionfigure is Diana Quirschfeld! Originally from Slovakia, she now lives in Utrecht and volunteers at Het Actiefonds in the East team. The East section deals with applications from Eastern Europe and the Middle-East. Diana talked to us about her beginnings as an activist, the film festival she’s organizing, and her fear that a functioning democracy makes people in the Netherlands less politically engaged.

The power of civil society

“I joined Het Actiefonds because I wanted to be closer to activism, to direct action, and grassroots organisations. Het Actiefonds itself also works more like a grassroots organisation: everyone’s there because they’re motivated and committed. In the Czech Republic, I did civil society studies at university. When I was born, there were zero NGOs in Slovakia, and that was the only study programme on civil society in all of Eastern Europe. It didn’t exist because there was almost no civil society.

“It’s great that I was able to find a job related to my studies right after university. But activism and civil rights are closer to my heart, that’s why I work with Het Actiefonds. I need that element in my life. Now, I usually work with very professionalized organisations, which are almost like companies. That’s great – the world needs such organisations. But I also really like the smaller, grassroots organisations. There people are very driven: they’re not doing it because it’s their normal job, but out of passion, or frustration, or some other motivation.”

Finding activists in the Netherlands

“When I moved to the Netherlands I was looking for people that feel the same way about activism as I do. And it really took me three years to find a group like that. I think in the Netherlands people have been happy with their government for so many years, and they trust the police and government so much, that they’ve become lazy when it comes to activism. When the plane was shot down in Ukraine, there were massive protests in Slovakia and the Czech Republic, but there was nothing in the Netherlands. I was really shocked, because those were Dutch people! I think it really is because democracy has worked here well for so long, that people are just like – okay, this is not my job, this is not my business, it’s the government’s job to fix that, not me.

It’s the price you pay for a functioning democracy. But I think Dutch people take that for granted, and I don’t think we should.”

“Last winter a journalist was murdered in Slovakia, with his fiancée. Ján Kuciak was twenty-seven years old and he was an investigative journalist, investigating corruption in politics and business. That led to the biggest protests in Slovakia since the revolution thirty years ago. We organized a small gathering here. The first protest was just a memorial for the journalist, we lit a candle in front of the embassy. In total we organized about five protests in The Hague and Amsterdam. Now we are organizing a small film festival in the Hague, where we show anti-corruption documentaries from the Czech Republic and Slovakia, in November in Humanity House. We hope that we can get a discussion going with Dutch people, together with Slovaks.

Also, we want to do something about the fact that no one cares about Crimea. They just took a piece of land, in Europe, and no one cares. For many Dutch people, it’s not Europe, it’s too far away — but it’s only a two-hour flight!”

“It was really great to find people who consider themselves activist. I joined about a year ago, I think, and what we do is we meet monthly and we review proposals. Most applications come from Eastern Europe or Russia or Central Europe. We discuss the proposals and decide if projects are in line with the strategy of Het Actiefonds. If needed, we check with the applicants and ask them some questions. We also try to reach out to our own networks. If we have a Slovakian or Czech group, I ask around: do you know these guys, are they for real?

The majority of people in the East section either is from the region, or has lived or worked there. Everyone in the group is somehow connected to the region.”

“Last weekend I was in Poland, and I was walking in the main square in Wroclaw, and I saw four guys holding a poster of a man kissing a small child. They had a megaphone, and they were playing a recorded speech about how gay people are pedophiles, destroying our society – horrible stuff. I stopped, and I saw a small group of LGBT people, peacefully counter-protesting, and I got involved – I ended up protesting with them for like two hours. After two hours it turned out that they were the organisers of a Gay Pride in Wroclaw, that we supported! I didn’t even know, I just ran into them. Those things that I get to see, or when I know someone who was there, those are things I remember. I’m very interested in civil rights so… of course there’s many cool environmental projects, but I don’t know much about climate change so for me it’s harder to connect. But the civil rights projects are really memorable for me. Almost every month there’s one proposal where I’m like, this is really cool, I’m glad people are doing this.”

“Working at Het Actiefonds, it really gives me energy to read about the people around the region where I’m from: how they work together to do something. And it’s great to meet with like-minded people once a month, it gives me hope. Every generation is responsible for peace in their country and in the world. The fact that the last twenty years the government did well here, doesn’t mean the next twenty years will be like that. We have to be involved in society.”

The Iron Sky Film Festival, co-organised by Diana, will take place on the 17th and 18th of November at Humanity House in The Hague. The festival will show films by Czech and Slovak documentary makers, whose work deals with themes of corruption and democracy in their countries. What is going wrong in these young democracies? And what has to happen to turn the tide? Click below to go to the event page on Facebook! 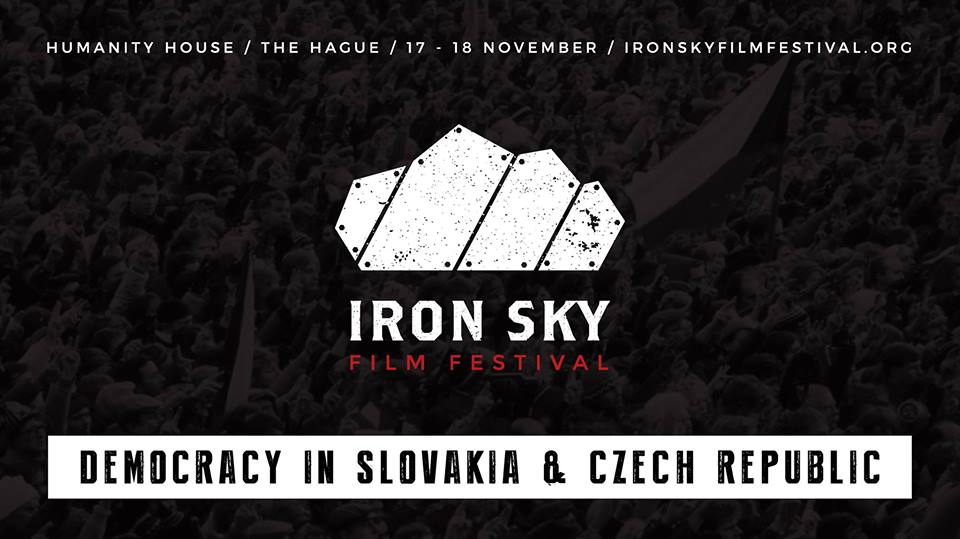