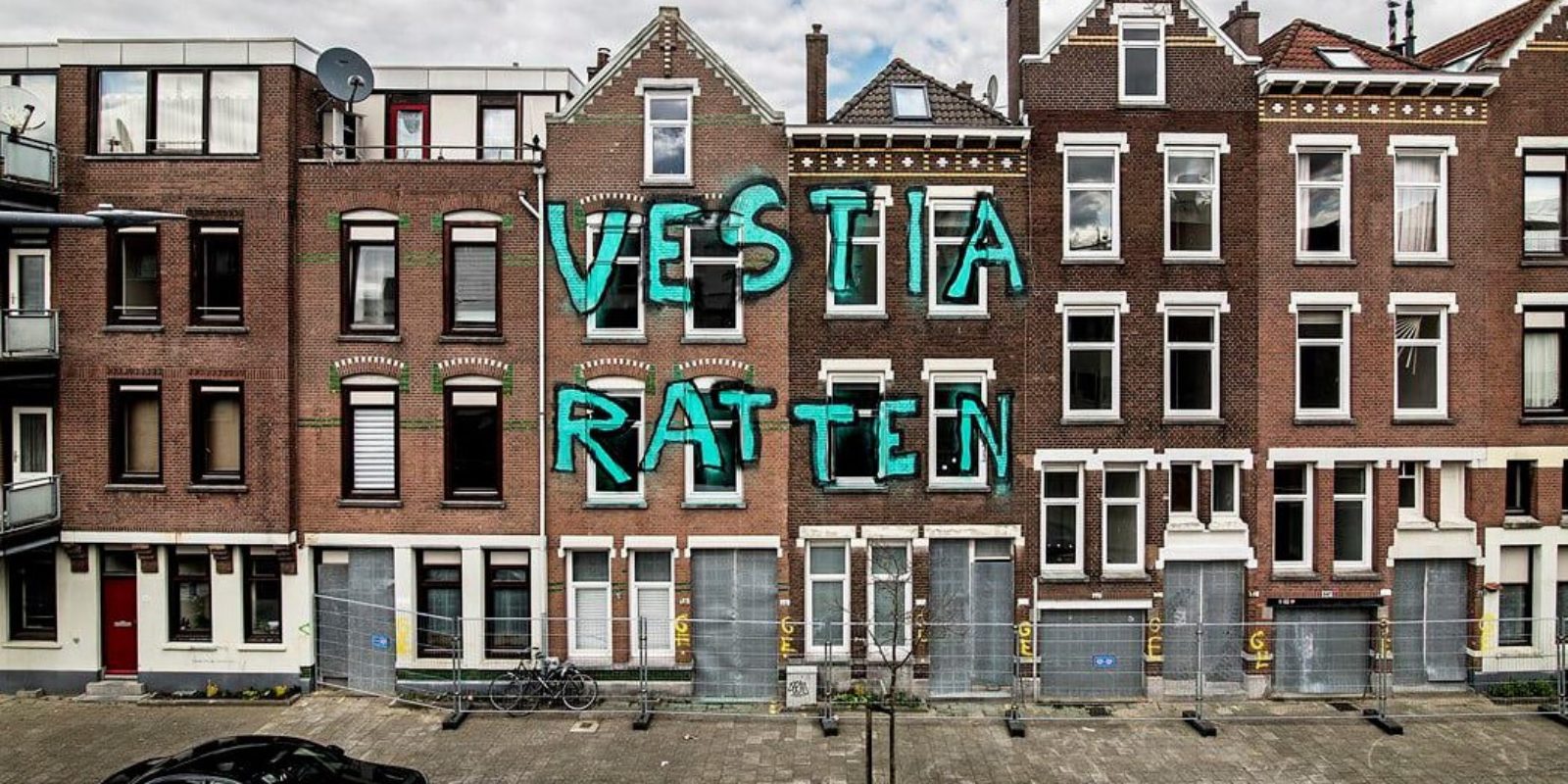 ACTION • Against the gentrification and demolition policy in the Tweebosbuurt

Campagne against the gentrification and demolition policy of housing corporation Vestia. “Because we will not forget.” Squatter collective Wielewaal will make sure that Vestia Rats will remain unforgotten with their t-shirt action for the Woonopstand on the 17th of October.

The Tweebosbuurt, a working-class neighbourhood in Rotterdam – now partly reduced to rubble – has been the battle scene of several residents committees, action groups and squatter collectives that have fought against the aggressive gentrification and demolition policy executed by the municipality of Rotterdam and housing corporation Vestia. In 2021 the fight has mostly been fought, and the demolition is already at an advanced stage. But residents and sympathisers with the fight against Vestia aren’t ready to call it a truce.

This text appeared on the front of two houses on the De La Reystraat in the Tweebosbuurt on the 15th of April. The same building was squatted three times (and violently evicted) within a short period of time in 2020 as a protest against the demolition of the neighborhood. Vestia made sure that within 24 hours a cleaning crew appeared to clean off the message, but it has been all but forgotten.

Squatter collective Wielewaal will make sure that the message Vestia Rats will remain unforgotten and is starting a t-shirt action with the national housing demonstration Woonopstand coming up. The group will print 50 shirts with the picture of Joke Schot and by this will keep the message Vestia Rats and the important buildings on the De La Reystraat visible during the protest on Sunday the 17th of October. Another group has already started a sticker action as well with the message Vestia Ratten.

At the start of this month, after a long fight, the curtain fell for the last residents of the Tweebosbuurt. Residents who didn’t want to move out of their homes fought their eviction in court, which ruled in their favor. Vestia started an appeal against the ruling and both parties had to wait until later this year on a final ruling before eviction and demolition of the Tweebosbuurt could continue. But Vestia didn’t want to wait and started a new eviction process. On the 1st of October, this new case appeared in court and the judge ruled that the last residents have to leave their homes within 4 weeks so Vestia can continue its destructive mission.

Het Actiefonds shows solidarity with the residents of the Tweebosbuurt, supports squatter collective Wielewaal with their t-shirt action, and supports the organization of de Woonopstand on the 17th of October.