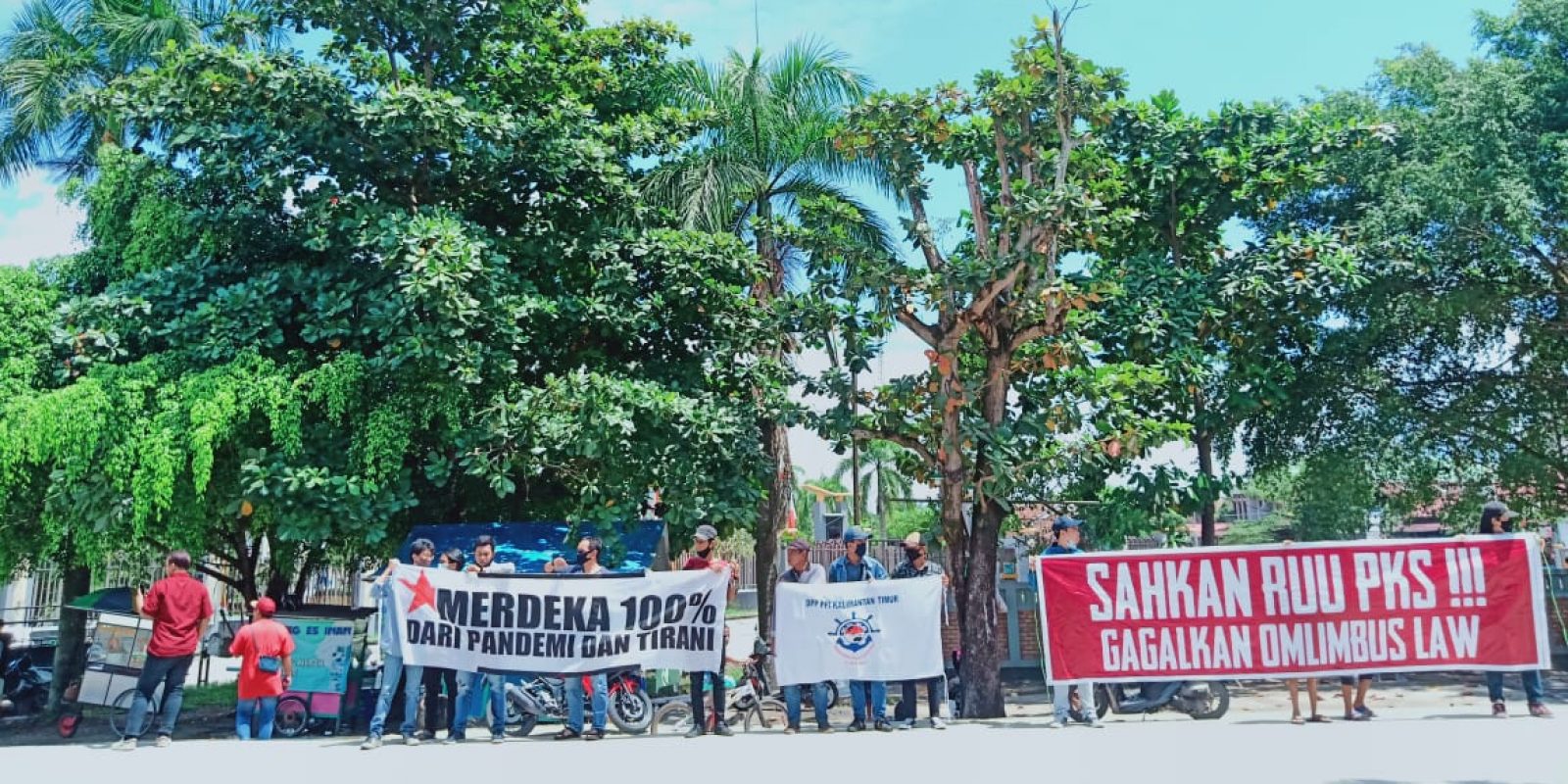 100% Freedom! Free from Pandemy and Tyranny!

The Covid-19 pandemic has exposed the incapabilty of the ruling class in Indonesia in providing health care and livelihood for its residents. Instead, the pandemic is being used as a freeway for the bourgeoisie to implement policies that were previously fiercely resisted by the people.

Indonesia is among the countries with the highest death rate due to Covid-19 but among the lowest in the amount of accessible coronatests in the world. Furthermore, the cost to fight the Covid-19 pandemic is being burdened on the working class and toilers’ shoulders. So said, the country suffers from rights violations and extreme living cost hikes in a financially difficult time.

Meanwhile the working class and toilers’ movement suffers from repression and silencing committed by the ruling class with various justifications under the pretext of handling the Covid-19 pandemic.

From August 13th to 17th, all around the country there were protests under the umbrella of the large “100% Freedom! Free from Pandemy and Tyranny!” action. This simulaneous National Action aimed to reignite working class and youth’s resistance against bourgeois class attack.

Among the demands from the activists were safe working environments for essential workers during the Covid-19 pandemic, a fair national wealth redistribution and centralization of means of production in the hand of the working class.

The protests coincided with important national momentums like President Jokowi’s annual state of the nation address, the People’s Consultative Assembly session and the New York Agreement of 1962’s historical momentum. The protesters called for a large strike among the working class, to show their discontent. In those series of actions, both working class civilians and youths participated. Outside the national mass demonstrations on August 14th, there arose a push to continue the protest. Yet, due to Covid-19, mass mobilization was not maximized but carried out in an online campaign.

After this demonstration the organisation got requests from other regions that didn’t participate yet but stated that they are interested and intend to participate in making this a nationwide movement against tyranny, aiming to overthrow capitalism and unite the working class and youth in a movement to build a socialist, classless society for Indonesia’s residents.

In 2011, the Socialist Union was founded as KPO PRP, to strengthen the socialist struggle in Indonesia. It aims for the overthrow of capitalism by revolutionary means and to build a socialist society. By socialism the struggle of workers is meant to organise as a state in the form of people’s councils, strengthening democracy and ownership as compared to the current state of affairs. The organisation is mainly focused on education, propaganda, mass actions, publishing books and organising discussions.