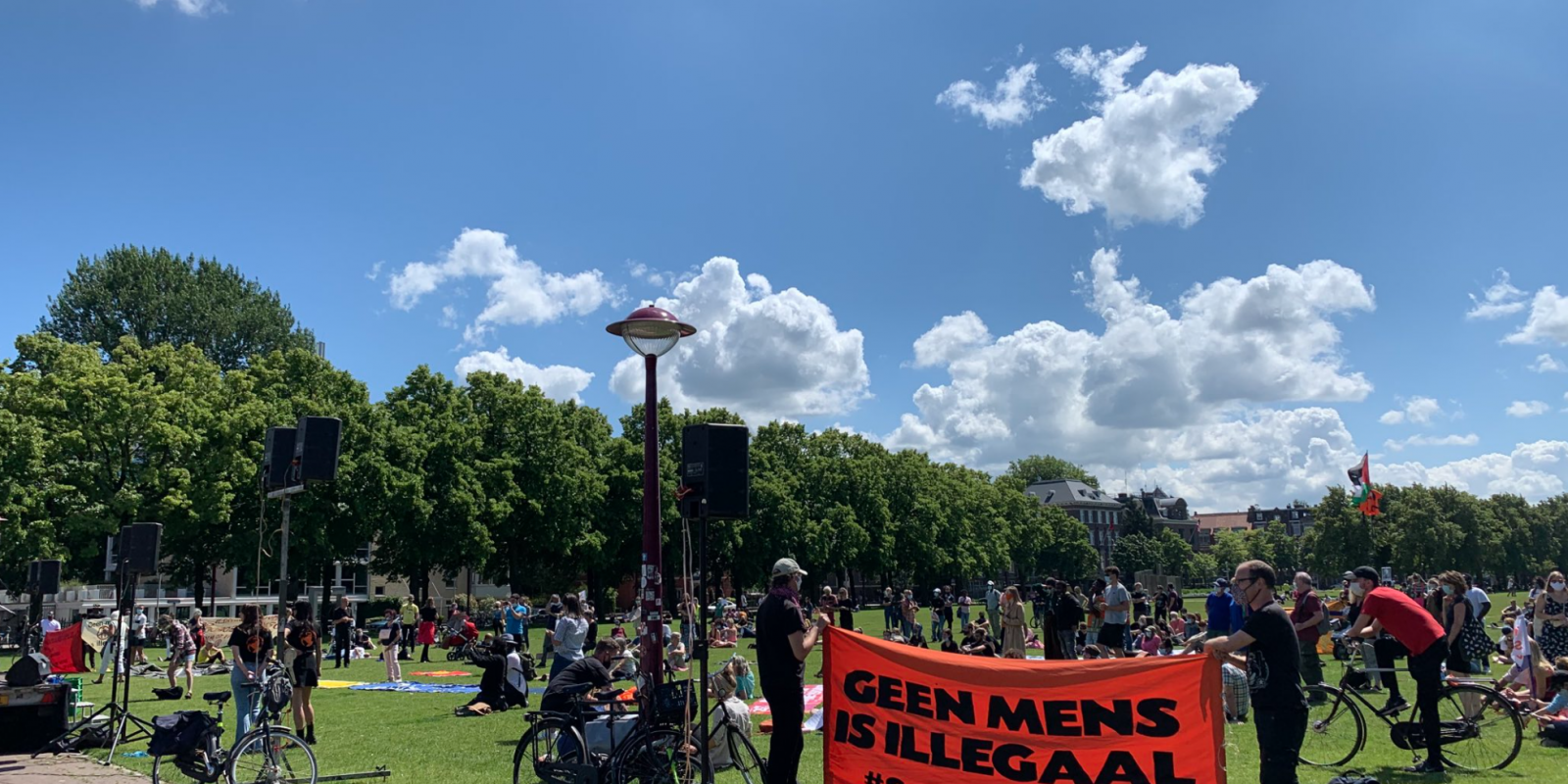 The deterioration of asylum policies is symptomatic for the systemic oppression of migrants and refugees in the postcolonial world order. On World Refugee Day (20 June, 2020) a demonstration took place for truly humane asylum policies, in solidarity with refugees.

In The Netherlands shelters are over-capacity, asylum procedures are temporarily stopped, and there is a shortage of protective means against the corona virus. In other European countries the situation is often worse. Also before the outbreak of the coronavirus was the oppression of refugees and migrants a daily reality. On World Refugee Day (20 June) a protest was organised in Amsterdam for solidary and humane asylum policies.

The spread of the coronavirus has put refugees under pressure in The Netherlands. Since March 19th the Dutch borders have officially been closed for non-necessary travels for people outside of the EU. At the same time, asylum procedures were stopped and shelters were closed. Refugees that needed a place to stay could move in emergency shelters, although they were not allowed to leave the premises nor to welcome visitors (read: detention).

Aside from organising emergency shelters, the Dutch government barely took action to guarantee a safe living environment for refugees. There has been a shortage of protective means in shelters, and people are living closely together. The Dutch immigration office started only recently with testing telephonic procedures with asylum seekers.

From the onset of the coronavirus, the Dutch government pushed inhumane asylum policies. There is a widespread fear that the recent measurements will only be partially reversed in the future. Meanwhile asylum policies have been under scrutiny for years, due to major budget cuts in 2017. At the beginning of March this year almost nine thousand refugees were waiting to start their asylum procedure for longer than allowed, which on top costs the government tens of millions of Euros (source: Trouw). Moreover, there has been controversy on topics of unfair asylum procedures and inhumane living conditions in shelters.

The deteriorating asylum governance is symptomatic for the systemic oppression of migrants and refugees in the postcolonial world orde. This oppression is partially legitimised by representation. Since the “refugee crisis” of 2015, the public discussion around asylum procedures and refugees heightened. In newspapers, rapports, books and party lines, specific images, symbols and words led to an increased “de-humanisation” of refugees.

Illustratively, the word “crisis” suggests an abnormal situation in which the government is legitimised in unlawful practices, in the interest of public safety. In a similar vein, an expression such as “a wave of refugees” that “floods the country” suggest that the nation-state is being threatened by an uncontrollable, non-human force of nature; a natural disaster. Such imaginaries caused asylum policies throughout Europe to focus on decreasing the risk of migration as much as possible, creating a European Fortress. Guaranteeing human rights was something that got shoved to the back.

De-humanising imaginaries played an important part in shaping asylum policies and procedures in The Netherlands. They legitimised indirectly both the budget cuts of the Dutch immigration service as well as the recent measurements taken during the spread of the coronavirus. In other European countries refugees often face even more criminalisation and violence, in impoverished and harsh environments.

On World Refugee Day (20-06-’20) a demonstration took place for truly humane asylum procedures, on Museumplein in Amsterdam. Het Actiefonds supported the organisation, so that flyers could be distributed. Especially not that refugees are put under increased pressure due to the coronavirus, we call to replace the violence against migrants with solidarity.