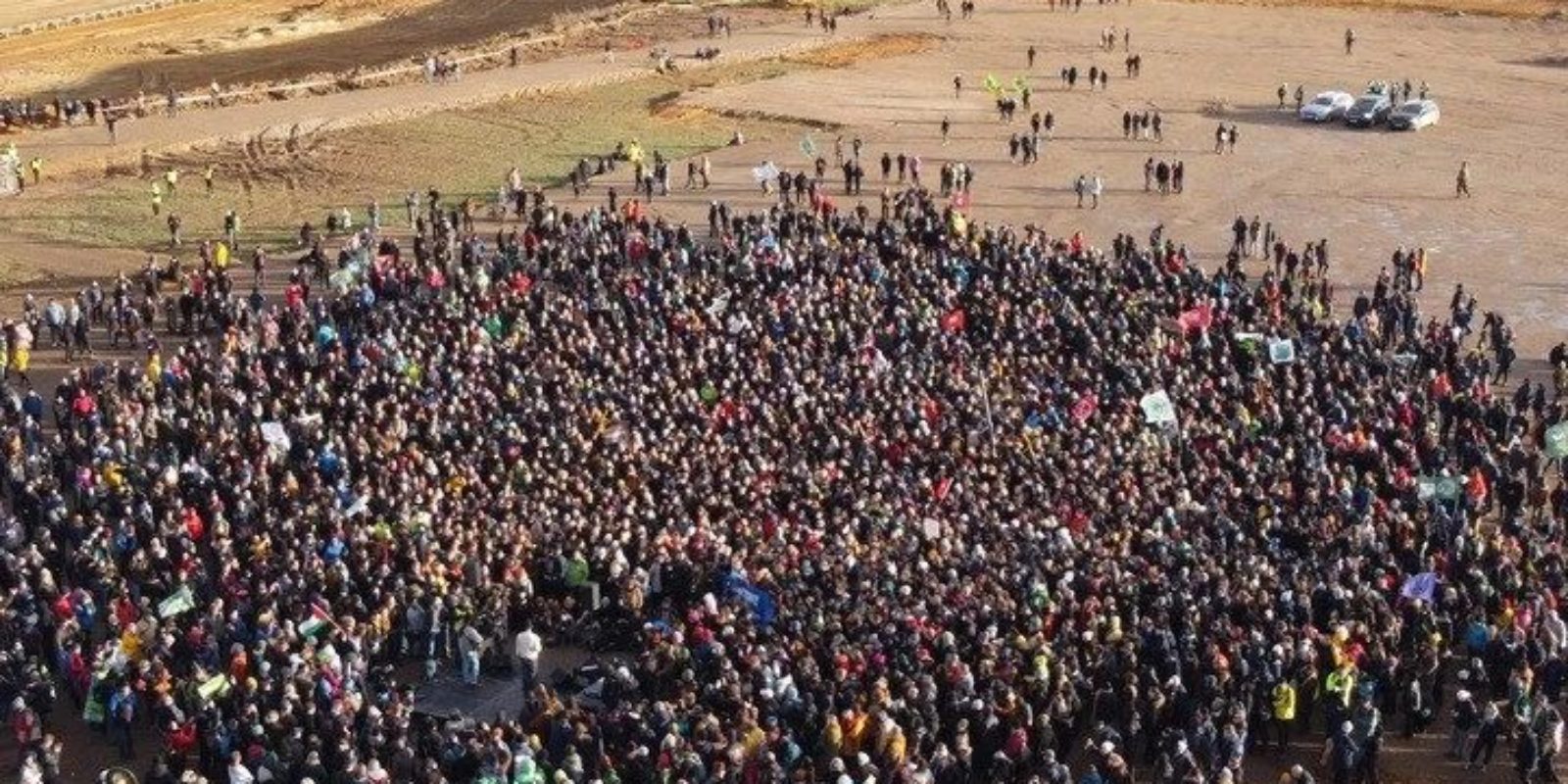 More than a year ago, Het Actiefonds supported the occupation of Lützerath. The German village was in danger of being wiped off the map so that coal giant RWE could continue digging for lignite in the Rhineland. Sixteen months later, Lützerath is still on the map, but excavators are approaching the village again.

Anyone who traverses the German Rhineland by car can marvel at the huge craters that dominate the landscape. The holes are so deep and large that for a moment you imagine yourself on another planet. The driver sees only dust and stone as far as her gaze reaches. The Garzweiler mine, for example, has an area of 48 square kilometers, twice the size of the municipality of Leiden. And that’s not even the largest. Right next door is the Hambach mine, with its 85 square kilometers one of the largest lignite mines in Europe.

Together, these two mines are already responsible for 75 million tons of CO2 emissions per year. By comparison, that’s about half of the Netherlands’ annual emissions. Half. And if it’s up to the energy company RWE, that number won’t go down any time soon.

Eckhardt Heukamp was already the last resident of Lützerath in September 2021: the other residents had been bought out or left. Yet Heukamp refused to leave the land on which he had grown up. Through a long campaign by climate activists, Heukamp and hundreds of activists managed to postpone the destruction of the village for more than a year!

But today, German police began evacuating the village. Let that sink in for a moment: the German state sends police to remove citizens from their own land so that an energy company can make even more profit from outdated fossil fuels. A police force, which, by the way, is funded by the taxes of German citizens and not those of the tax-dodging RWE. Last night the police have already cleared 200 activists. An equal number is still at the scene.

Nigerian climate activist Peter Donatus sees the same politics in the Rhineland as in the Niger Delta: “It is the same methods and the same multinationals working to destroy the environment around the world.” He advocates climate justice. Donatus: “Climate justice is a concept from the Global South, born of necessity. I am happy to see young European activists adopting our concept, but then they must also be able to see from our perspective.” Racism in the climate movement remains, he observes, “we still have a long way to go.”

RWE and the Greens

The renewed interest in the ground below Lützerath comes from the energy crisis Germany has been in since the Ukraine war. More than half of Germany’s natural gas was imported from Russia. To become more energy independent, the government has pledged to keep some nuclear power plants running longer, as well as to mine more lignite. The Greens, one of the current ruling parties, defend the end of Lützerath by pointing out that in exchange for this area, the Garzweiler mine must close eight years earlier, in 2030.

But climate activists are not impressed by this argument. They claim that the Greens have been guided by erroneous calculations by RWE itself. Politicians should have commissioned independent research into the costs and benefits of Lützerath earlier. That would have shown that it makes little sense to destroy a large area of land for a few years of coal extraction. That is, if it stays at just a few years: the history of climate goals teaches us not to take promises from energy giants so seriously. It’s about the first thing polluting companies ask for: pollute more now, in order to suddenly be completely sustainable in the future. So far, no one has successfully performed this magic trick.

The end of Lützerath might be near, but the climate battle in the Rhineland has proven effective time and again against RWE. Like the Hambach Forest before, Lützerath has quickly become a symbol of the struggle against energy companies, profit-oriented thinking, and disastrous geopolitical games. Hambi stayed! Lützi stays too!