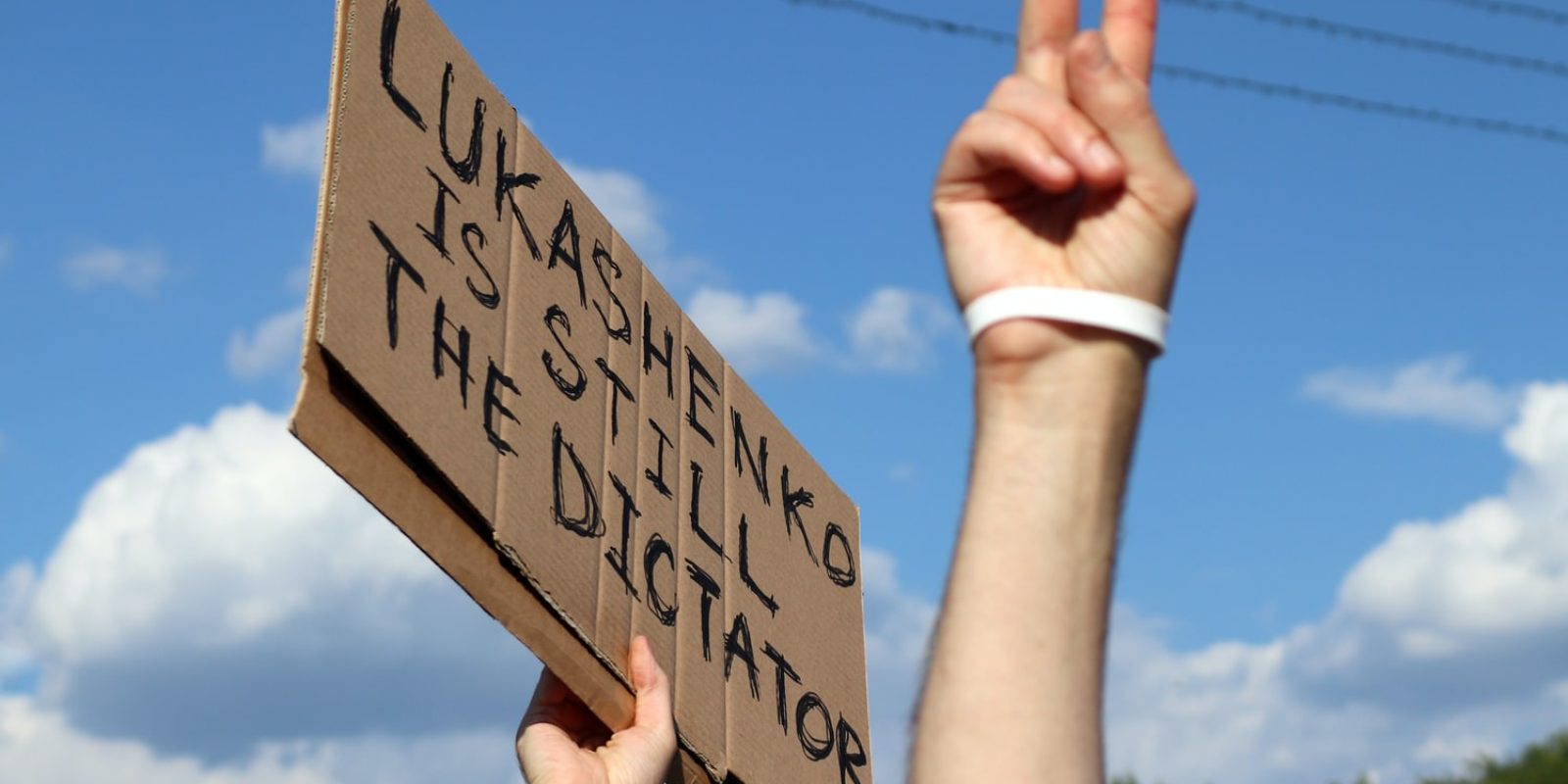 On Europe’s painful silence – testimony of a Belarusian activist

Great unrest broke out in Belarus last year. A revolution seemed imminent. After President Alexander Lukashenko won the elections again, people took to the streets en masse to protest. The population demanded his resignation: never before have so many people protested in this 26-year-long regime.

Het Actiefonds supported various action groups that continued to fight at the risk of their own lives against the oppressive regime of this dictatorial leader. We spoke to an activist who wishes to remain anonymous, from a small town in eastern Belarus.

Can you briefly describe the situation in Belarus before the elections in 2020?

“Even before the 2020 presidential elections, the situation in Belarus was very tense. Society practically choked on the anti-Belarusian politics of Alexander Lukashenko! All his actions are directed against Belarus; he is only concerned with the interests of Russia. Both in Minsk and in my own province, in an extremely remote and isolated part of the country, there were demonstrations in support of Svetlana Tikhanovskaya.[1] All residents wanted change.”

“We saw the whole country straightening its shoulders, as it were, to shake off the Russian tyranny. And the epitome of that is the bloody dictator Lukashenko. The society of my region finally realized that we have the opportunity to change the situation. We all went to the barricades!”

“It is difficult to say why the situation was so different now from previous elections. After all, all the previous ones were kept in the same way: literally all protocols (from district committees to the CEC[2]) were forged in the most incredible ways.”

Can you tell us about your activism?

“‘Group of Likeminded Initiatives’ is an organization of like-minded people committed to positive change in communities in the region and its suburbs. The main target group consists of young people and local residents whose human rights are being violated. Main activities are activating and mobilizing young people, protecting human rights, providing information and various local cultural projects.”

When the election results were out, how did you feel?

“The election results in August 2020 were not much of a surprise to us. The results have always been falsified: not a single stage of the election has been fair since 1996. All members of the Election Commissions are appointed in Belarus by government authorities. The commissions therefore work on behalf of the government and falsify everything, always, for the full 100 percent.”

“But what did come as a shock was the unprecedented beatings and torture of protesters and opposition supporters by the Interior Ministry and other security forces immediately after the results were announced.”

How did Het Actiefonds help you?

“Immediately after the elections, we were greatly helped by Het Actiefonds. In the support of  Het Actiefonds we saw the face of European solidarity! And not only in our own region, but also surrounding communities received support for their activism. So yes, the help we received from Het Actiefonds at the time was incredibly significant for our protests.”

We know that a few weeks after the protests, people started to lose their strength and courage. Can you describe what happened? What was the repression you faced?

“It is very difficult for people outside the former Soviet Union to understand what real repression means. But here are a few examples:

1. Losing your job. This is a terrible consequence, especially in small villages where it is almost impossible to find a job. Teachers, workers… Suddenly they can no longer provide for their livelihood. In my own region as many as 150 people lost their jobs. They are on special lists of the Ministry of the Interior or the KGB. Many of them were forced to leave for Russia. Why Russia? Because it is impossible for them to go to Poland or Lithuania. These and other Eastern European countries do not welcome oppressed Belarusians.

2. Suspension of universities and other higher education institutions. This is often followed by forced military service of 1.5 years. In my village, 27 villagers were suspended and sent to the army.

3. Fines. And the amount exceeds your wildest fantasies… An example: the fine for participating in a protest can be up to 1.500 euros. A monthly salary in the city is 250 to 300 euros at most.

4. Deprivation of liberty. The maximum prison sentence ‘to pay for freedom’ in Belarus has now risen to 18 years. I think no further comment is needed here.”

How are you now? And how is the rest of the situation now for you and your fellow activists? Are people still planning new actions?

“How am I now? I have been arrested twice for 10 days since August 2020. I was beaten up by KGB agents. I am currently under criminal investigation under Article 342 part 1 of the Criminal Code (‘organization or preparation of actions seriously violating public order, or participation therein’). I have no idea what my status is. My house has been searched and I am now awaiting arrest.”

“My citizen passport was taken by the KGB. I’ve been out of a job for a long time – I’m a history and socio-political studies teacher (in the past). I used to be an entrepreneur too. However, in the early 2000s, three of my businesses were ruined by the authorities. My wife was also fired because of me…”

“Now my whole family (my wife, son and daughter and myself) makes a living from my nighttime security and unofficial construction work. My wife, a former school principal, does cleaning work for wealthy residents in the village. What can I say about other activists? Their situation is about the same. Many of them have lost the ability to feed their families. There is a massive migration to Russia. And I haven’t even mentioned the people who have lost their freedom…”

Do you often experience a feeling of powerlessness? And what do you do then, how do you keep up the courage?

“I actually feel powerless all the time. I returned to my hometown in the late 1990s. My goal was to make the life of the villagers better, more organic. But since my return, I started to feel more and more powerless. I was always aware of what was happening in Belarus. Lukashenko’s inhumane, anti-Belarusian activities were clear to me. Everything he did was in the interest of Russia. My beloved Belarus slowly turned into Russia… What did I do then? Everything I mention above! And how do I keep up the courage? Lately I can’t do it anymore. My friends and I are all in a state of panic. We now see the consequences of what is happening: Russia is swallowing our country. As a historian I must say that this has of course happened before Austria, Czechoslovakia, Lithuania, Latvia, Estonia, and so on. And as then, Europe is again doing nothing to save Belarus.”

“Fighting the dictatorship in Belarus is not exactly a rewarding activity. But of course we will continue our work, we will continue to fight against the bloodthirsty Russia and her bloodthirsty personification, Lukashenko… I am sure that ‘Luka’ would have been overthrown by the Belaruss long ago, had it not been for the Russian dictator standing squarely behind him . I am afraid that the situation in Belarus can only be changed if we change the situation in Russia.”

Het Actiefonds remains in close contact with activists in Belarus and stands in solidarity with protest movements worldwide that are suffering from repression.

[1] Svetlana Tikhanovskaya is a political activist and opposition leader. She lost the election, but continued to call for mass peaceful protests from Lithuania. In her own words, she never aspired to the presidency; its goal was to achieve fair elections and a free democracy.