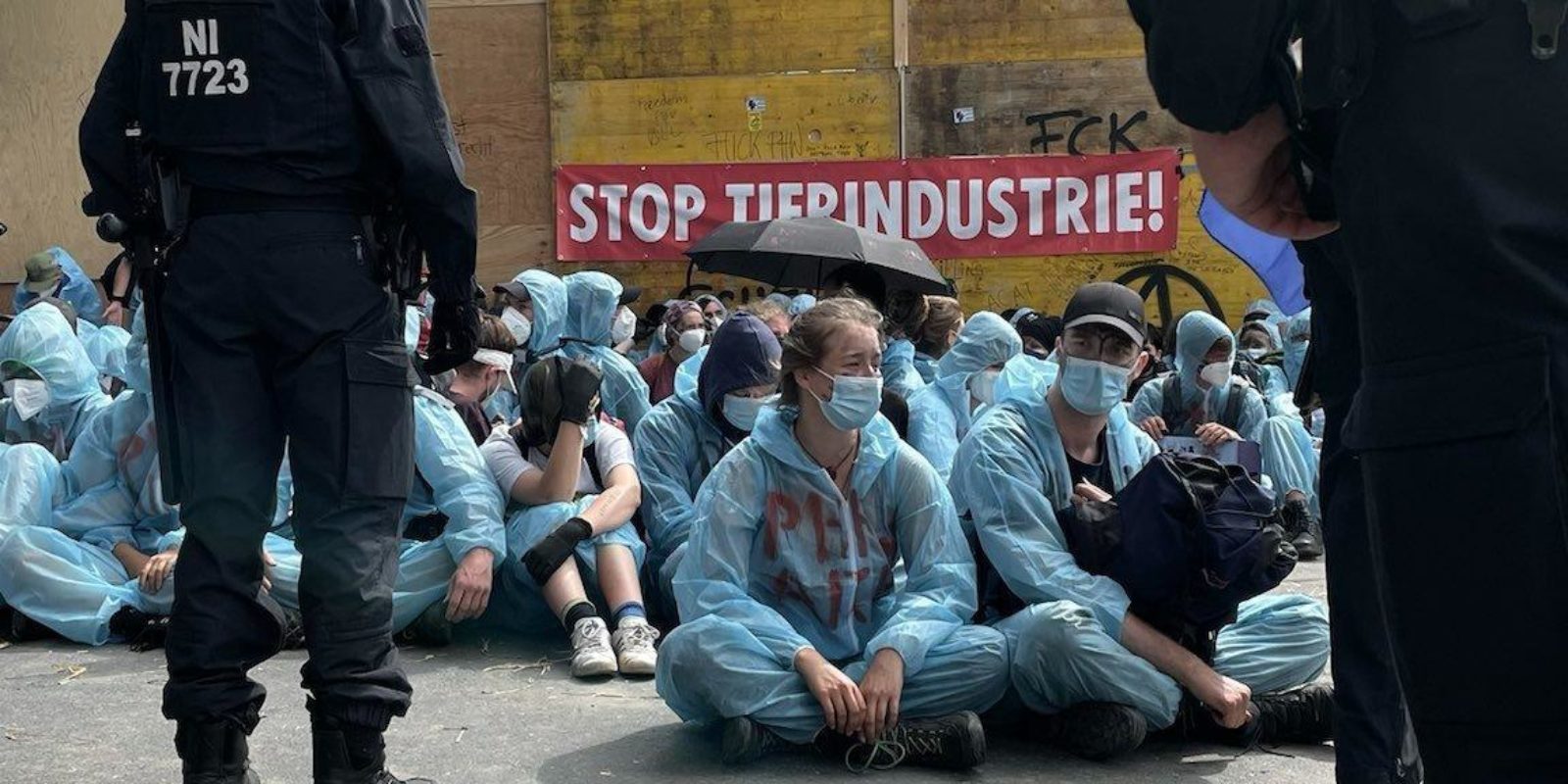 Uniting the fragemented resistance against animal industry, AniCA adresses a broad range of issues. The animal industry is not only violating animal rights, but is also a huge contributor to greenhouse gas emissions and has an enormous ecological footprint due to massive use of land, water, manure and antibiotics. The neocolonial production of fodder used […]

Putting the spotlight on the connections between meat production and climate change, AniCA addresses the harm the animal industry is causing. Blocking the biggest poultry company in Germany, they showed that the animal industry has to stop in order for humans and animals to live!

Uniting the fragemented resistance against animal industry, AniCA adresses a broad range of issues. The animal industry is not only violating animal rights, but is also a huge contributor to greenhouse gas emissions and has an enormous ecological footprint due to massive use of land, water, manure and antibiotics. The neocolonial production of fodder used to feed up the animals is causing deforestation and exploitation of local populations. Also in Europe, the animal industry barely provides for safe and sufficient working conditions in factories, especially during times of COVID. Additionally, the animal industry plays an important role in the emergence and dissemination of zoonoses, which caused the COVID pandemic and can bring about new pandemics in the future.

Combining actions for climate justice, animal rights, workers rights and against possible future zoonoses, AniCA is a strong alliance of groups that have been organizing several effective actions.

AniCA organized a camp and mass action against the PHW Group, the largest poultry company in Germany. The program of the camp raised awareness about everything that is wrong with the animal industry. Farmers and citizens were invited to talk, exposing the exploitation of PHW of animals and humans alike.

Widely covered by the media in papers and on TV, the action was a big success. During a full day, the access to the central storage of the company was effectively blocked.

Their action demanded of the PHW to protect workers in slaughterhouses and meat processing units from COVID and to make sure they receive sufficient health protection. During the pandemic, the animal industry was a big covid hotspot, in Germany and globally.

A second demand was the banning of the import of animal fodder. For the production of animal feed, resources such as land and water are used that could be used directly for the production of food or for climate protection measures such as reforestation. A large share of the protein-rich animal feed fed in Europe originates from Latin America, where large areas of rainforest are being cleared.

A third demand was the shifting of the subsidies that are currently going into the animal industry to solidary and ecological agriculture.

AniCA believes in a common radical fight for emancipatory, solidary and sustainable alternatives to our current capitalist system.

Afraid of this united activist movement, PHW built a protective wall (as can be seen in this video) around their main seat in the days before the action, which shows that they take activism against the animal industry seriously and see it as a threat!

Het Actiefonds is proud to support AniCA and their actions that scare the animal industry!