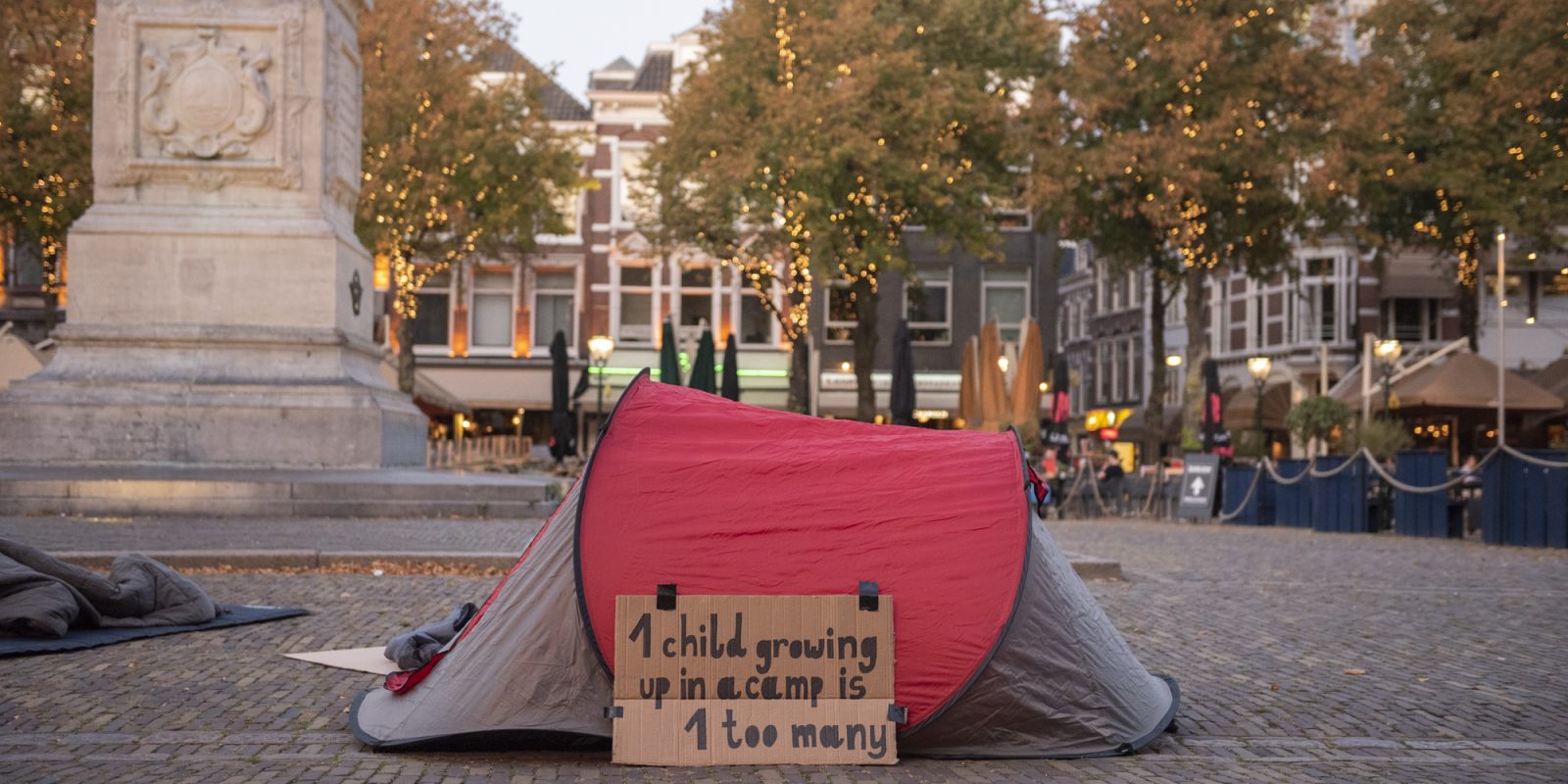 Organization ‘Evacuate Moria’ occupied a square (20/09/’20) in front of the Dutch parliament for 24 hours following the humanitarian catastrophe of the burned down refugee camp Moria on Lesbos. The Dutch government must take her responsibility to create humane migration policies.

Refugee camp Moria completely burned down on the 9th of September, making 13.000 people homeless. Organization ‘Evacuate Moria’ demands the Dutch government to take responsibility in creating more humane migration policies. During a 24-hour protest around 20 people occupied the square in front of the Dutch parliament, making the humanitarian crisis tangible for politicians and passers-by.

Refugee camp Moria on Lesbos burned down completely on September 9. This humanitarian catastrophe made 13.000 people homeless, who were already living in horrible conditions. In the days that followed the Dutch government decided, under pressure, to take in five hundred victims. However, criticism was raised since the total amount of refugees that are allowed to enter The Netherlands diminishes by the same number. In other words, the government still defends inhumane asylum policies and has yet again shown her true self.

Action group ‘Evacuate Moria’ calls upon the Dutch government to take her responsibility in safeguarding the lives of the victims of Moria. Politicians cannot avoid the humanitarian crises on the Greek islands, the Mediterranean Sea and within their own countries.

On September 20 a 24-hour demonstration was organized: This is not a home. From Sunday 6 p.m. until Monday at the same time the square in front of Parliament in The Hague was occupied by around twenty people. A Moria-like refugee camp was built with tents, carton, mats and sleeping bags. Politicians and passers-by were given bananas and water, being asked whether they could get through the day on such a rationed diet. The bananas read messages like ‘NoMoreMorias’ and ‘Evacuate Now’; by offering something to people it was easier to get conversations going. On Monday afternoon an old resident of Moria gave a concert, and voicememo’s of people currently on Lesbos were played.

The vulnerability of staying outside for 24 hours was respected by many, turning into moving, personal conversations. Politicians remarked that many of them noticed and admired the protest. Despite the success of the action, the organization reflected that a lot of work remains to be done: “As long as our migration policies remain de-humanizing, we will fight for a more humane world and safe migration routes.” The transnational organization ‘Europe Must Act’ contacted ‘Evacuate Moria’ to organize this type of protest throughout European cities. As we speak they are looking for a date.