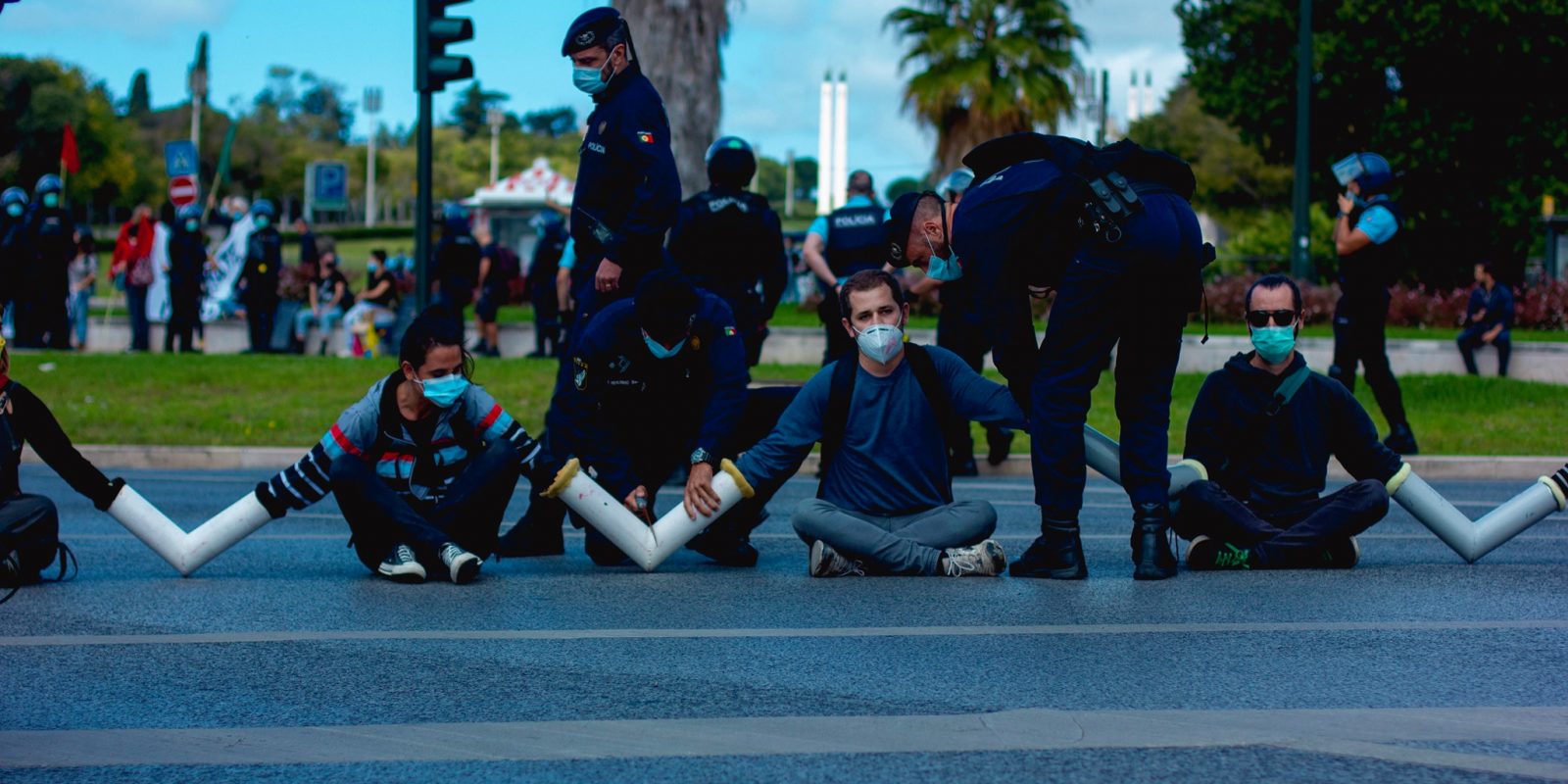 "We are the anti-bodies" against the virus of capitalism

A coalition of climate movements organized a wave of direct actions and civil disobedience in Portugal. On October 5th (2020), 100 activists blocked the main roundabout in Lisbon under the header “We are the anti-bodies” against the virus of capitalism.

How capitalist crisis-management has been dealing with the Covid-19 pandemic is triggering large scale economic and social crises. The importance of public services and essential jobs has become increasingly clear. Thinking outside of of the boundaries of a climate-only perspective, a coalition of Portuguese climate movements is organizing  a wave of direct actions throughout September and October, for systemic change, the betterment of public services and basic human rights.

The Covid-19 pandemic has brought about immense changes in the world. Many critics point to a capitalist-oriented crisis management that favors macro-economic goals, while it remains blind for mental health issues, basic human rights and the destruction of livelihoods, among other things. The pandemic is causing probably the greatest economic crisis in history, leading to social crises in various aspects of life such as housing, education and employment.

The climate justice movement is currently one of the most important internationally organized movements available. That is why a coalition of climate movements in Portugal (consisting of Climáximo, Fridays for Future Portugal, Art for Change and Climate Save) decided to voice their discontent with our current predicament, in relation to climate-issues within a wider systemic framework of anti-capitalist thinking.

From September to October, a wave of mobilizations will take place throughout Europe, under the name of Climate Care Uprising. The Portuguese coalition organized three three key moments. On September 25th, actions were organized through the broader Salvar o Clima platform. On October 5th, a mass civil-disobedience action was organized by Climáximo and endorsed by activists, artists and others. On October 17th, a mass demonstration will be organized by a large alliance of diverse social movements, under the name Bailout the Future not Profits. This is a follow-up to a previous mass demonstration of the same name in June we supported, which was connected to Black Lives Matter. You can read about it here.

Het Actiefonds supported the coalition in their civil-disobedience on October 5th. In an action called “We are the anti-bodies”, more than 100 people blocked the main roundabout of Lisbon, which connects five boulevards. The action narrative was that the activists were the antibodies against the virus which is capitalism. Among other things, the demands of the anti-bodies were 1) carbon neutrality in 2030, 2) universal, basic public services, and 3) a cap on income, introducing a new income tax that taxes 99% on income above 150.000 euros. The participants managed to convey their message; they blocked the roundabout completely for more than an hour. No one got hurt neither was anyone detained. It was  a peaceful disobedience action that achieved its technical as well as political goals.